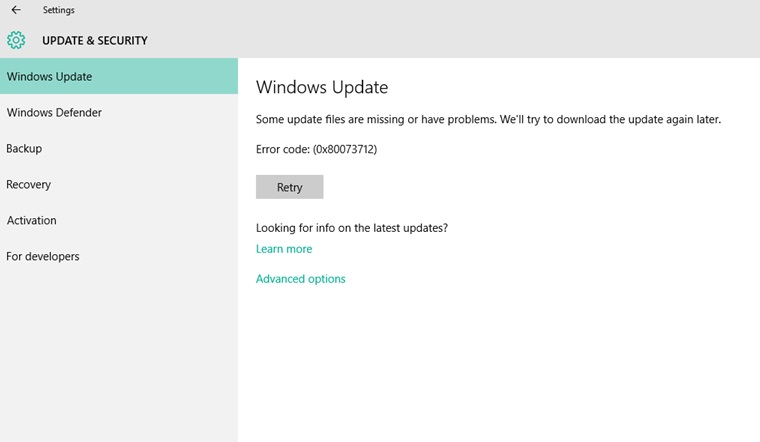 Sometimes there are complaints about the Windows Update Error Code 0x80073712. Where the update is not being able to update successfully. It happens when there is a file that is important for the update to complete but it’s either missing or deleted.

There are a few methods to solve this error. With proper guidance and steps, the users would be able to completely eradicate the Update Error 0x80073712 from its roots.

Every Windows operating system has an inbuilt troubleshooter, and it has proved to work very efficiently in solving many problems in the system. So here are the steps the users could use for applying the troubleshooter application in the system:

Step 1 – The user can search for the application by pressing the Windows key and then typing the application’s name. [The user has to click on the option troubleshooting under the control panel.]

Step 2 – Then the user has to click on the fix problems of updates under the System and Security.

Step 3 – After that last step, the application of troubleshooting would start. The application would find the problem and highlight it after solving it. The user has to wait until the running of the scan gets completed.

Step 4 – After that, the user has to try updating the window again. If they find the Windows Update Error 0x80073712 again then they have to try a different solution.

Users don’t always release that they might have to use this tool to prep their window 7 device for the update to window 10. And sometimes using this tool actually helps in solving this problem.

The following steps would help the users to do so:

Step 1 – The user has to download the tool from here

Step 3 – After the scan gets over the user has to check if their problem is solved or not.

Sometimes this issue is not fixed till the user performs an in-place update. In this solution, we recommend using the Windows Media Creation tool for performing the in-place update. The following steps would help in doing so:

Step 1 – First, the user has to download the app Windows Media Creation tool

Step 2 – Then they have to accept the prompts and pop-up Windows.

Step 3 – Then the user has to select the “Upgrade this PC Now” option.

Step 4 – Then they have to select the “Keep Personal Files” option and in the next prompt that the user has to click on the install option.

Just like the troubleshooting application. The system has many other in build applications. Among which there is a tool name Deployment Image Servicing and Management Tool. The tool serves Windows. And can help in solving any kind of problem with the Windows updates. Many people around the internet server stated that this had helped them solve the problem too

The following steps would help the user to implement the solution:

Step 1 – The user has to press the Windows key and X key, together and then select the Command Prompt (Admin) from the menu what will pop-up on the window [the user can also Click on Start and then type cmd in the box after that the user has to right-click on cmd and lastly they need choose Run As Administrator.

Step 2 – When the command prompt opens up the user has to put in the following commands into the box:

Step 3 – The user has to wait until all the commands have been applied correctly. And then they have to close this application by either clicking on the close icon or by typing exit and then press Enter.

Step 4 – After that lastly, the user has to run the updates again and check if the Update Error 0x80073712 has been solved or not.

Many times, these kinds of problems can be solved by using and inputting very simple commands. Some users have used this method and they have stated that it has been effective in rooting up their problems.

The following steps would help other users to solve their problems too:

Step 1 – The user has to open the run dialog box (they can do it by pressing Windows key and R key together).

Step 2 – Then they have to type in the box “cmd” and then press shift control and enter together to get the administrative privileges.

Step 3 – After that, the user has to put in the following commands in the window that opens up next:

Step 4 – After putting all the commands in the device, the user has to finally check if their Error Code 0x80073712 has been solved or not.

Hopefully, any of these solutions would help any user to get rid of the Windows Update Error 0x80073712. But if the problem still prevails then visiting the nearest service system would be wise.

How to Activate Showtime Anytime By ShowtimeAnytime.com/Activate